Hello, friend. I have no idea how you got here, but welcome to the first of a multi-part series of articles about the making of an animated short. That short is called Future! Taco! Meow!, and I co-created it for Disney in 2014.

I’m going to share how we pitched the idea, developed the story, designed it all, animated everything and produced the whole short. Start to finish; warts and all.

Was it one of the most challenging and rewarding creative experiences of my life? Yes it was. And I hope by writing this it will help some other dreamer out there who is considering doing the same thing.

So, new friend, if any of that sounds interesting, stick around.

Let’s Start At The Beginning

Future! Taco! Meow! (I’ll say FTM from here on out, if that’s okay with you) was conceived in October of 2013 and born into this world August of 2014. It was the product of many breakfast meetings between my long-time friend and collaborator, Reza Rasoli, myself, a fantastic crew of artists (full credits here). And of course the whole thing was made possible by a few lovely people at Disney.

This is the story of how it all came to be.

Reza and I had been talking about making an animated show for a while. In fact, we had tried before, a few years prior, with Nickelodeon. So, in late 2013, we finally decided to do something about it. Fortunately for us, we had a connection to help us get started. Someone we had previously worked with (see Nickelodeon a couple sentences back) was now working in development at Disney.

Even more fortunately for us, this person was looking for intelligent and handsome people to pitch them ideas to develop. Jack pot! This probably sounds a little ridiculous and altogether too easy. And it kind of was. Were we in the right place at the right time? Yes, but we had also developed this relationship for years and, in my opinion, genuinely wanted to work together.

After reconnecting with and discussing some options, we agreed to pitch an idea for Disney’s Shorts program. Here's how it worked: we would pitch loose ideas, we’d all pick an idea, and they’d give us a modest budget to produce a 2 minute, animated short based on it. This short would then serve as a proof of concept for what our show could be.

From where I was sitting, this was a win/win. We would get to work with someone we enjoy working with and pitch Disney a show idea. If it got picked up for series, fantastic! And if not, we would have a short we’re proud of to show for our efforts.

All that was standing in our way was a few signatures.

Hire a lawyer to read your contracts.

You might be thinking, “Duh, Greg. What do you think, I’m a dummy or something?” Listen, I know you're not a dummy, but I cannot emphasize enough how important this is. Legal contracts can be intimidating and difficult to understand. It's even worse when you think you understand them, but you probably don't. Especially when dealing with the who-owns-what-and-for-how-long-stuff.

So do me favor and before you sign anything, find a lawyer to translate it for you. If you have a question or disagree about something, bring it up. If possible, have your lawyer talk with the network/client’s lawyer about any points of contention. Contracts are put in place to protect both parties and negotiation is part of that process.

Okay, back to the story.

At long last (about 3 months) our deal was finalized and signed by everyone. We had a kickoff call with our development team at Disney to regroup and talk next steps. It was time to get to work! Or as I like to call it, play the "what if" game.

It was officially official. We had a signed deal with Disney and were on the hook to produce a short. Now, before we dive too deep, let’s go over some of the parameters we had to work within. They were deceptively simple:

Bullet points in mind, starry-eyed and fueled by the appeal of newness, we immediately got to work. On our own time, we would each jot down idea nuggets. Then later, over breakfast meetings, pitch them to each other. It went something like, “Okay okay, what if it’s like this weird thing was like… and then it was all…”. It’s exactly what you expect.

We didn't have a litmus test for good ideas, but if I had to explain it, I would say it was mostly about making each other laugh. And whether or not we could sustain conversation about it.

Some concepts were great and easy to build upon. Others, that might've sounded brilliant at the time, fell completely flat when we talked them through. Turns out having something make sense and be funny was proving to be a challenge.

After a handful of breakfast burrito meetings, we found ourselves revisiting a theme time and time again: garage band. Reza and I both grew up in Los Angeles playing music and had so many stories about the dynamics of being in a band. Fun fact: that’s how we met—our emo/indie bands played a show together.

So we followed that garage band thread and started working on an outline for the story.

The first thing we shared with Disney was a lengthy, beat-by-beat, outline for two story ideas. They were loose, had several holes, but we felt good about them. We weren't writers (still aren't) and it was a start.

Cut to my inbox.

There I was, heart-pounding from having just clicked Send. Our longwinded idea kernels were on their way to the mouse-shaped powers that be.  Ever send an important email and then sit there refreshing your inbox? Yea, me neither.

In this moment, I had all kinds of questions and emotions swirling around in my head. What would they think? Are these ideas any good? Is this what they’re looking for? Is it enough? Are we even doing this right??

We got a reply later that day about scheduling a time to talk.

Fast forward three weeks. I’m skipping lunch, taking a conference call in my office to talk with our friends in development. The good news: they liked the idea of a garage band (yay!). The bad news: they weren’t very fond of our story ideas.

Their problem with the stories were that they weren’t coming from the characters. The conflict was happening to them, but not because of them. And in both narratives, that conflict came from an external force (e.g. the internet going down) as opposed to a character need or want.

Though it wasn’t what I wanted or expected to hear, this was really great feedback. While we took a moment to process, one of the executives shared a suggestion that stuck with me. I’m paraphrasing, but they said something along the lines of:

Take your character, along with everything you know about them, and put them in an empty, white room. Write a story about what they do there and how they act. What would they do, how would they react to that situation? Are they inherently funny or inherently boring?

This blew my mind. I thought it was a great exercise to develop our characters and determine their motivation. Strip everything else away and travel deep into their feelings. If they can be entertaining and hilarious in an empty, white room, they can be hilarious and entertaining anywhere.

People are busy. Important, executive people are the busiest. Scheduling a time to get everyone together doesn’t always happy right away. As excited as you are about moving forward with something, take a moment to practice your patience—especially when you get into development. Things take time. Remember, it took a few months just to get our deal finalized.

It was now mid April 2014. We had taken their sage advice and given more thought to who our characters were and what they cared about. We were ready to share again. But this time, we took a different approach.

No three-paged, bullet pointed outline this time. Just one PDF. Easy to read with large type. And most importantly, drawings.

We opened it with character development. Each of our characters had their own page with background stories, personality traits and beliefs. It set the stage for the group dynamic by describing how different their lenses were for viewing their world. We also included some rough sketches and ideas for their look.

Then, instead of outlining an entire story, we put together a list of six, brief, story concepts. They were two to three sentences that set up the conflict and were designed to quickly gage interest. And we kept a few more in our back pocket, just in case we blew it with all the others.

Here’s one that didn’t get picked:

Our gang is stuck in traffic on the largest inter dimensional highway in existence. Minutes feel like hours and their restlessness gets the best of them, leading to a power struggle for the temperature and music inside of Bertha (their taco truck turned tour vessel).

Max decides to crank up the AC turning Bertha into an icy throne. Ozzie heads for higher ground and sunshine on the roof, but inadvertently starts a hip day club for fellow traffic folk. Meanwhile, Stew becomes a power drunk bouncer for said club.

All in all, this meeting went a lot better. Maybe it was because we were in the same room, but it felt like we were all speaking the same language. After some discussion—and guidance from our development team—we settled on a story concept we all thought had legs. Here was the logline:

After a successful show, an overly confident Max has a supernatural ego trip. And under the pressure of losing their own heads (and their friend), Ozzi and Stew are forced to deflate Max’s monstrous melon.

It had taken nearly five months, but we had a thumbs up to move forward with our story. That might not sound like a big deal, but it was a victory for us. And the first of many important milestones in this experience.

Now that we had a story direction, it was time to develop it into something real. That meant storyboarding, designing characters and (gulp) writing dialogue.

In the next part of this series, I’ll talk you through our development process. Spoiler alert—it wasn’t easy. But that means it's going to be a fun read, right?

Stick with me, new friend, we have a lot to cover. 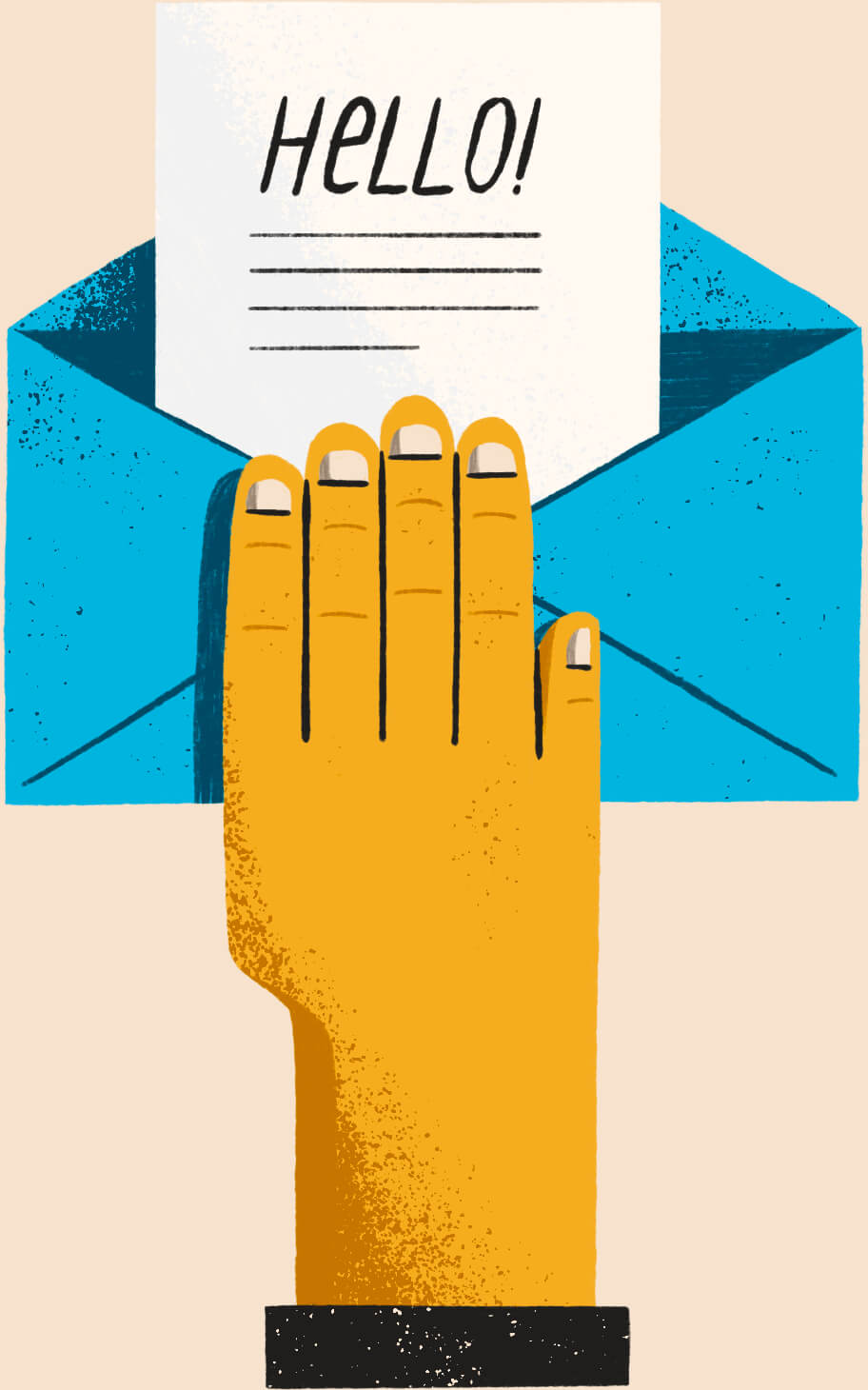 Check your inbox for a confirmation email and to make sure you get your special, welcome package :)

Uh oh, something went wrong. Try that one more time.